Our plan was to fly to Easter Island on the Monday of our last week out here. Tickets were booked well in advance (at least compared to planning anything in the last 6 months) and they cost a fortune (by objective western standards). Alas my excitement to set foot on this remote land was dampened when I found myself spending most of Sunday either in the bathroom or in a comatose state in bed courtesy of severe food poisoning due to my breakfast eggs. By Sunday night I had no food to give to the toilet gods and continued to lie in bed immobilised by high fever. I was so out of it that Andy took a picture of the room while he was packing his stuff without realising that I was actually in the picture. I was one with the bedsheets. Things were not looking good.

By noon on Monday, spurred by a fully caffeinated coffee, a lot of Greek paracetamol (thanks mum) and the prospect of fulfilling a life long dream I was all smiles and ready to pack. Andy could not wait to escape the confines of our small room and so we found ourselves at the airport with a full four hours to spare. By the time we made it through security however both the drugs and the coffee had stopped working and I no longer felt as energetic. As we boarded the brand new Dreamliner taking us (and A LOT of Chinese tourists) to Easter Island or Tahiti I tell Andy “that I think i have a fever”.

At this point I should note that over the last 24 hours Andy was completely perplexed every time I asked for a thermometer. “What’s the point? What will you do differently if you know that you have a fever?”. This might be an English thing; in Greece we are all amateur doctors with easy access to drugs and therefore determining ones temperature and deciding on a course of treatment is in our DNA. When I left for the UK in 2000 I packed a thermometer and every drug I could get my hands on. I still bring antibiotics back to the UK. Questioning my medical skills and need for a thermometer was infuriating and I struggled to explain the process other than to say  “that’s what we do”.

As we cruised over the Pacific I asked the flight attendants for a thermometer. 38.6. Shit. More Greek drugs, more water, more multivitamins. Now, if you ever find yourself in Economy class and are not happy with the service or the food; fake a fever. For the next three hours I get checked on by a flight attendant every 10 minutes. One of the captains comes back to see how I am doing. I get tea, cookies, extra food from first class (I did not eat much of what was served the first time) and cold towels to put on my forehead. I have more pillows to keep me comfortable than you’d find on a king size bed in a 5* honeymoon suite. If the flight was not full I am sure I’d have spent the remainder of the journey in first class leaving Andy back in economy still wondering why one needs a thermometer.

Finally, around midnight on Monday we land at Easter Island. I say goodbye to the crew and the captain and step out on the steps. The air is warm and heavy. The Chinese are taking selfies with the plane in the background whilst the rest of us file in two lines; those that are staying here and those that will board again to continue on to Tahiti. The landing strip, we later find out, used to be the longest in South America as NASA have deemed Easter Island an alternative landing zone for the Spaceshuttle.  Which is comical when you see that the airport building is made up of two long thatched-roofed huts. At the time I did not have time to appreciate the comedy. The fever had subsided, I was wearing a lei and I was in F**king Easter Island!!! 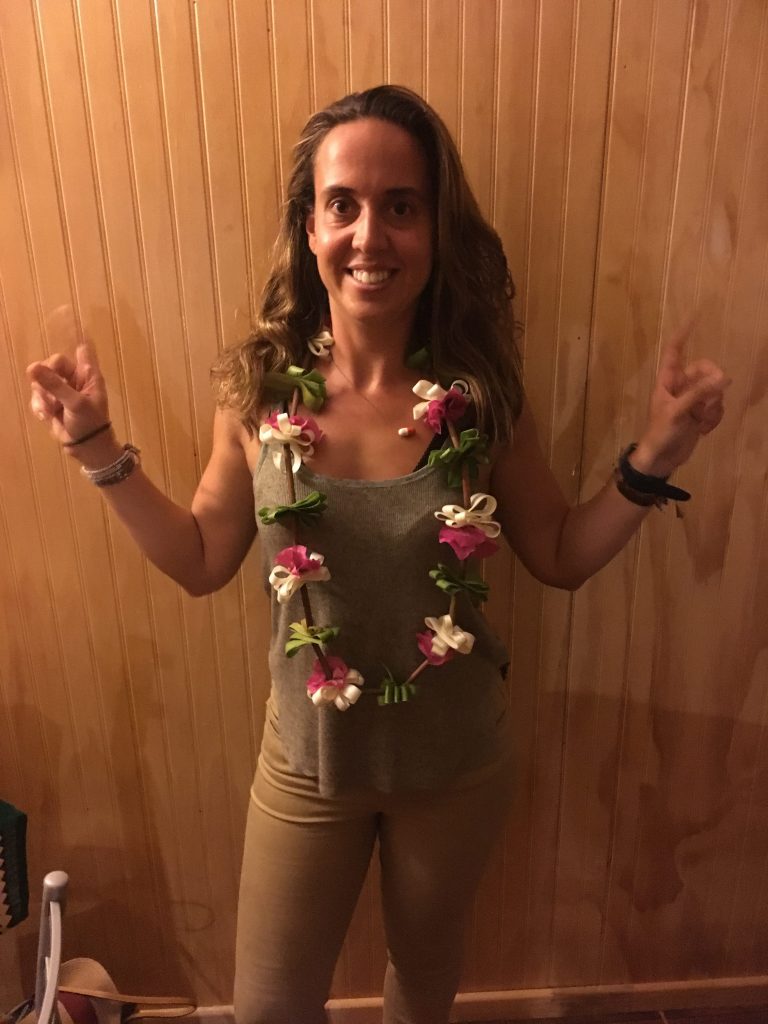