The last time a tried to learn something new was about 9 months ago when Andy and I took a 10 week crash course in Spanish. Which I found surprisingly easy given how phonetically close Spanish and Greek are and my general ease in learning new languages. It was not hard to excel in a classroom full of English people who did not speak another language.

But then we came to Arica to work on our surfing. Given Andy’s aptitude for sports and the fact that at some point in his life he owned a surf board (albeit the wrong size for his height) I fully expected that we’d be at completely different levels. Surprisingly we were not and the first couple of days we were on same-sized boards paddling for the same waves. Given that neither of us had surfed in a year we surfed green waves on 9ft boards. For the uninitiated this is like asking a fully abled teenager to stand on a table – it ain’t that hard.

Now before I get further with the story allow me a small digression (again mostly for the uninitiated) on surfing and how it’s taught. Whilst most surf schools will teach you how to pop-up (ie stand on your board) that is about 5% of the information you need. Once up on your board you need to ride the wave (any Kelly Slater video will show you what I mean). Thankfully Yoyo’s approach focuses on exactly that, popping up on the board is hardly celebrated in his classes. In essence you ride a wave by:

So on the third day of our second week in Arica we moved away from the jump-on-a-table boards to shorter fibreglass boards (for the initiated, we are still on longboards). And that’s when it happened. My mind froze, I lost complete control of my body and I spent a good couple of hours tumbling around in waves that kept crashing on my head. With every crash or missed wave I lost confidence in myself, questioning every move and wondering if I knew what I was doing. Thanks to my parents I absolutely love the ocean but it was a very trying time for our relationship; by the end of our morning session I was in tears and like Xerxes wanted to whip the ocean into submission. Now, I appreciate that this is a sport, and sports you learn by doing and practicing but Yoyo’s helpful tips from a distance only added fuel to the fire.  ‘Feel the wave’ he yelled. ‘Deep breaths; be one with the ocean’ I heard as I paddled for a 2ft wave that crashed on me. ‘What are you doing with your knees?’ now increasingly frustrated as I embarked on mistakes typical to a first timer. For the OCD, list-loving person that I am ‘feel the wave’ is not helpful instruction. Give me a bullet-pointed list, a plan and I am going to be all over it. But feel the wave? What criteria do I need to fulfil before I can claim that I have felt the wave? The session came to an unceremonious end when I crashed into Andy and broke the fin of the board.

I had not caught a single wave. Andy on the other hand had one of the best sessions of his life. How the f@ck did that happen? We started the day on par and finished with him discussing how we can advance his technique, watching YouTube videos before the evening session and contemplating what boards we will buy when back home.  I was not happy. 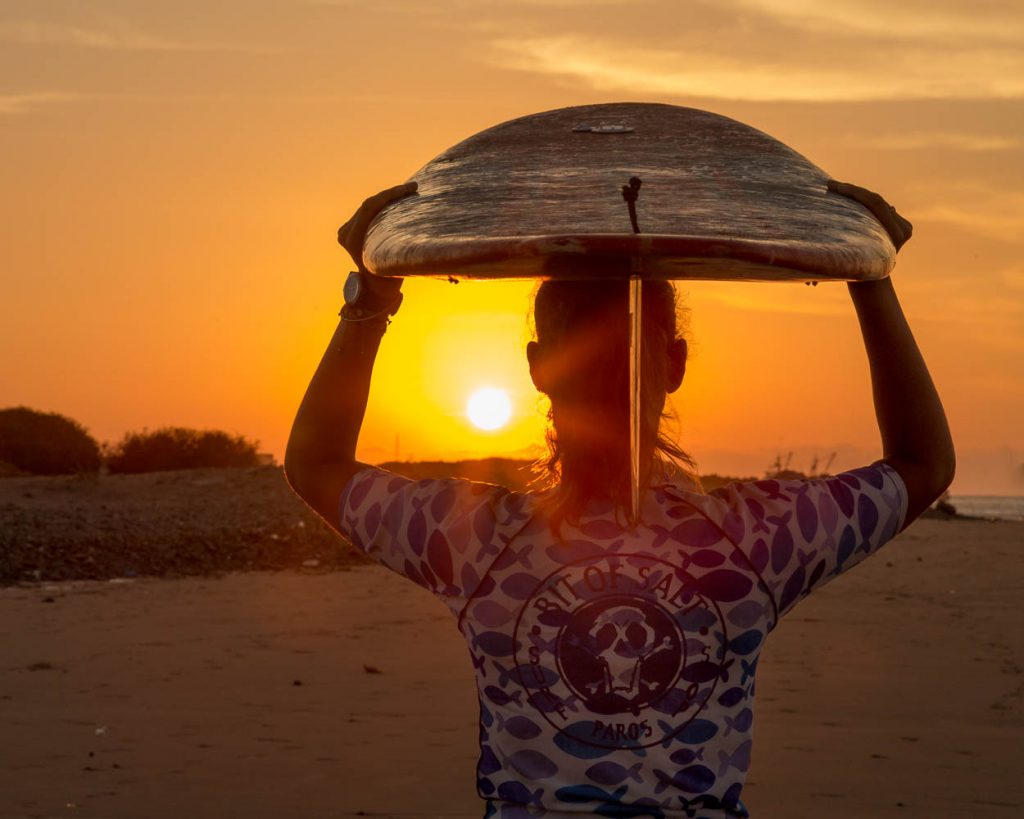 The next day I went back. Andy on an even shorter board than the day before. I on the other hand was on a 9ft 2in foamboard. Again for the uninitiated foam boards is what we use to teach complete novices who have never seen a surfboard in their lives. I had to fix my timing – figure out the basics outlined above from the beginning. On the beach, looking at the waves, I was almost in tears convinced that I would never surf again.

It took me four more sessions to fix my timing and ride a wave all the way to the shore. One by one I had to unpick all the mistakes I had made in that disastrous session. Sitting at the back looking at the waves coming in I would talk to other surfers picking up tips and ideas from each of them as to ways to improve. I would complain about my timing issues only to be told time and time again that that’s how you learn. By doing and re-doing and trying and insisting and failing and trying again. By learning how to learn new things.

I kept thinking of a Freakonomics podcast we listened to a while ago which centred around research showing that it takes about 10,000hrs of consistent and purposeful practice to master a skill. I kept telling myself that I am way shy of the 10,000hrs. After sessions I would do a postmortem with Andy counting down the mistakes I had fixed. I watched videos on YouTube about the mistakes I was not able to fix (on a side note, this one of Tim Ferriss learning how to surf with Laird Hamilton gave me hope. And a couple of interesting tips).

Fast forward to this morning when we went to a different break to ride bigger waves and I was handed a short board (6ft 2in). Me. The girl who a week ago was battling waves at the back on a foamboard. I did not ride a single wave today. I bodyboarded three which I took as a huge win; it means I have figured out timing and paddling. I still haven’t figured out how to pop up on a shortboard – my toes dangle off the board. But. I went 9 rounds with the ocean this morning and it was a tie. I’ve got another 9,712 hours to go till I master this sport; and I can’t wait even though Andy is better at it than me.