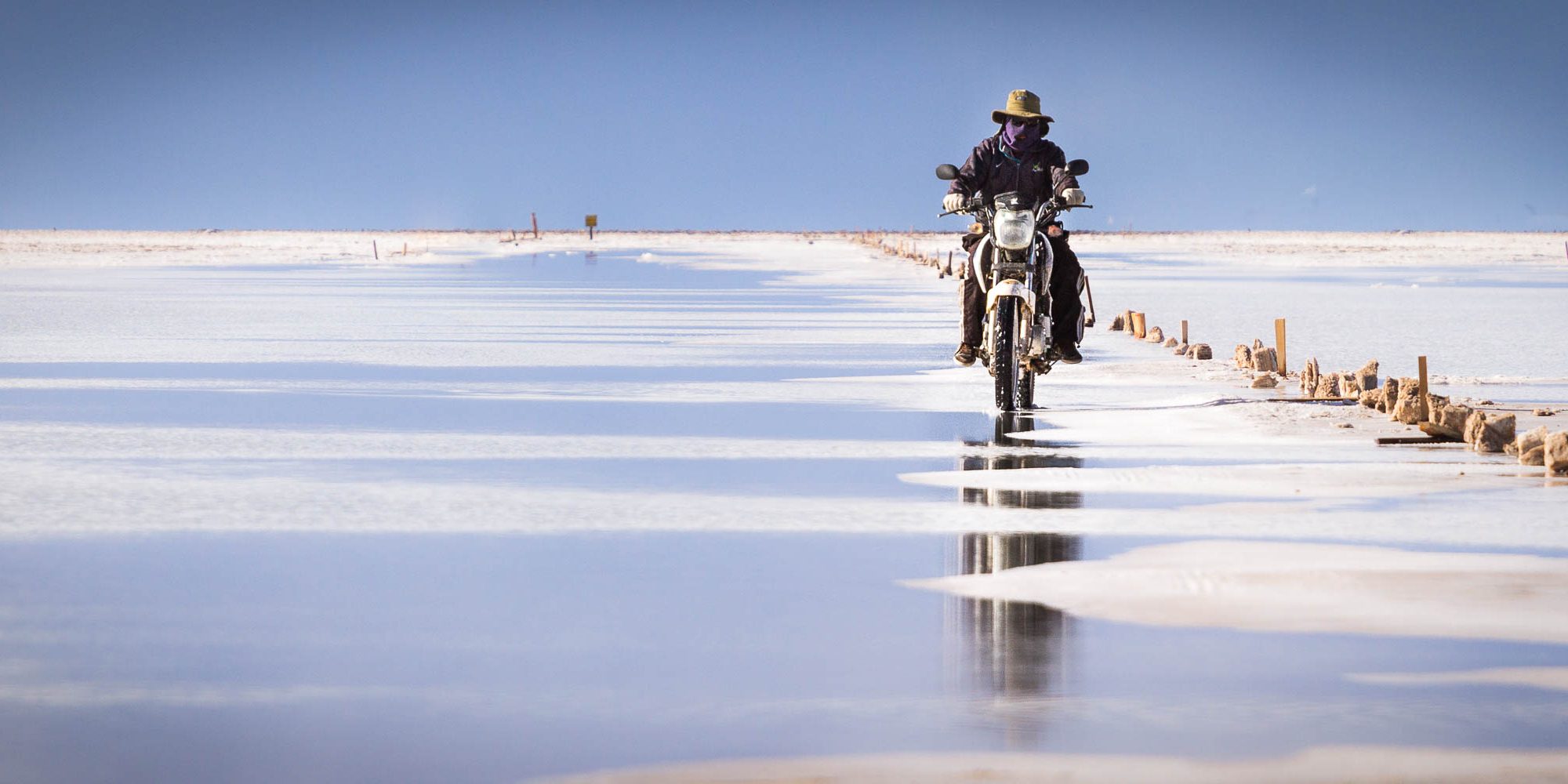 When you pick up a hitch hiker you have a very,very short period of time for you both to figure out if either of you are a serial killer.

As I rolled past, he put his cigarette out on the heel of his Vans and put the butt in his pocket. Serial killer he may be, but a considerate one at least. I stopped, rolled back, window down and asked where he was going. Atacama. Jump in amigo.

And so began three days with 25 year old musician, actor, director, street artist and ayahuasca devotee Benjamin Gonzalez. Somewhat of a walking stereotype, he’d sold his didgeridoo for food money five days ago, but a good conversationalist with the enthusiasm of youth and, importantly, fresh music on his phone to listen to.

The route to Chile presented some wild topography. The Salar Grandes (big slat flat) the ‘Mountain of colours’ the ‘Big rock tower’  the ‘Volcano of god’ etc. all poking out of, or sprawling across in the case of the salt flat,  the alto plato. (The largest, highest plain outside of Tibet). A photographers delight no? Well, yes but the rare rains were coming down, so anything pokey was in cloud. Never-the-less the muted palette of burnt red, washed out yellow and gun-metal-grey was stunning.

At 4100m we found a wizened Indian women, crouched in the mist wrapped in alpaca shawl by the roadside, sitting like some kind of solitary guardian of the pass. We bought a handful of coca leaves, for the altitude yeh, wished her buenos dias and wound our way higher switch back by switchback.

At 4300m we stopped to see if we could help a family of four hundred and their broken truck. I knew the ostentatiously mounted fuel can would one day be useful. Given the efficiency of their work; one syphoned, one was opening  the carburettor, one was fining their funnel, it was clear that this happened often. Making this kind of trip with the knowledge of probably not having enough fuel struck me as bonkers, but something about the ragged nature and lean feature suggested this wasn’t a choice.

At 4400m we crossed the salar. An hour of shutter work watching, with a degree of concern, the electrical storm coming out of the mountains. Tall, solitary figure, waving a carbon fibre lightning rod (tripod) around I eventually called it a session and we moved on. 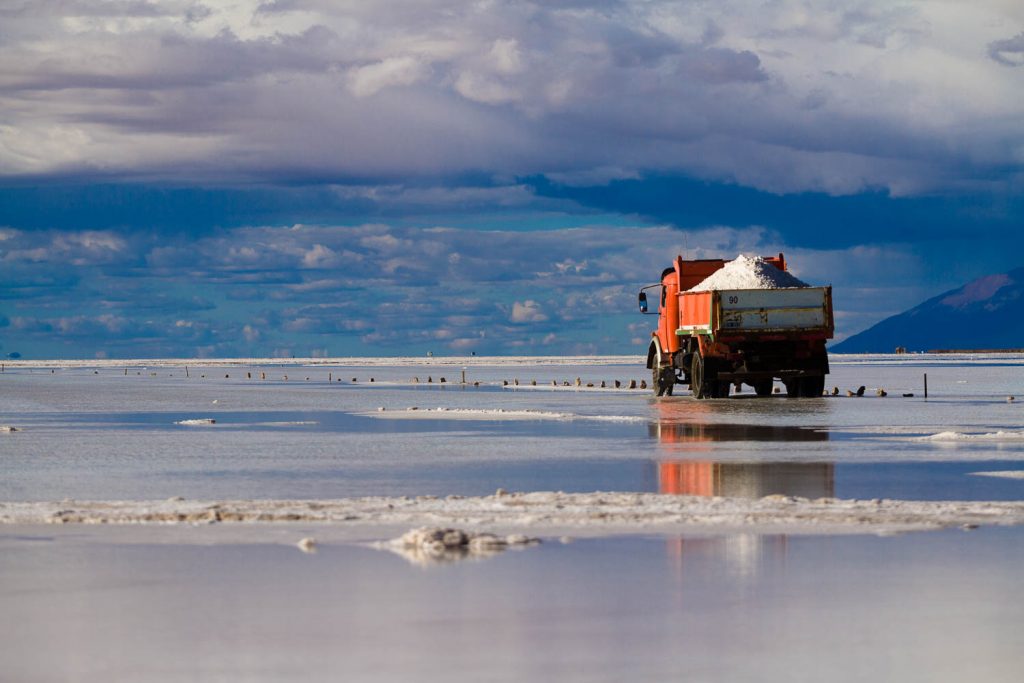 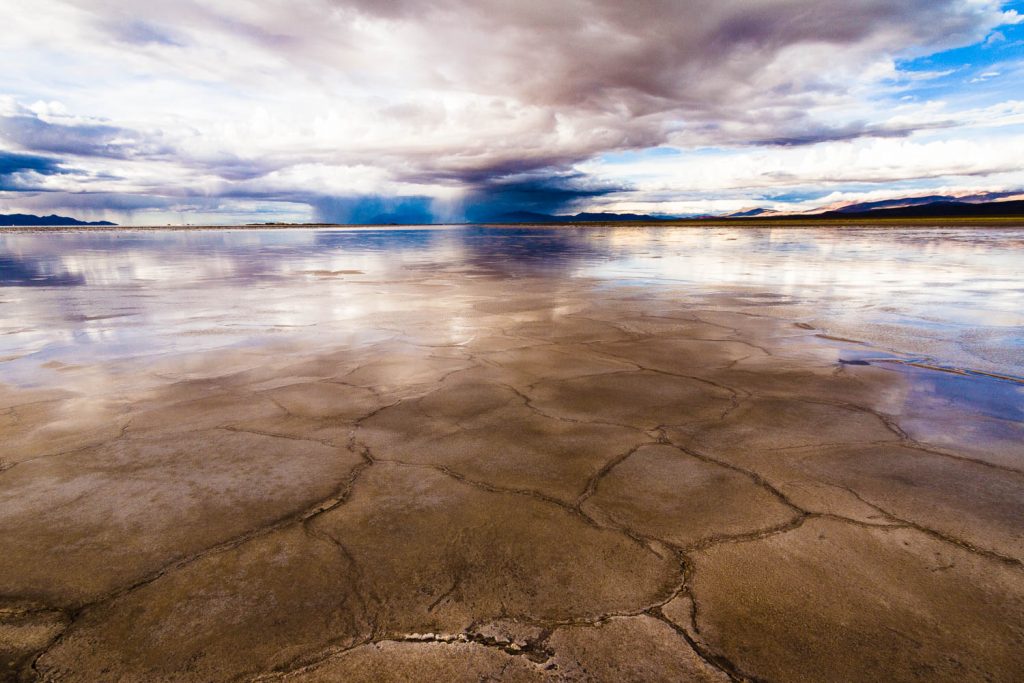 At 4450m we found a solitary building and some shipping containers operating as a truck stop. The sole proprietor seemed a little confused when we asked to sleep out back, in a tent and in a car. As I picked Gellan through the scrub she came running out, waving her arms so I stopped. I stopped, it turns out, with one wheel on the plyboard cover of the shit pit. A perfectly car sized hole that took had taken bowel contents of passing truckers for years and was the clear patch of dirt I was heading for. Anosmic or not, getting your car towed out of a toilet ain’t pretty, so I was glad she’d seen. The evening passed with conversation about god, gods, hallucinogenics and the taciturn nature of actresses.

At 4500m the following day we hit the border after an hour in sleet and snow, glad we weren’t on motorbikes. A little heart rate nudge as the photoshop forged paperwork was once again scrutinised and, this time, found not to match computer records. A winning smile, the indisputably honest face and the  firm conviction that I am the rightful owner of this vehicle gets the eight stamps required to take Gellan back into Chile.

At 4600m we gaze UP at the mountains in the cloud and wonder how the Inca carried their child sacrifices to the summits, with out Goretex(!)

At 4810m the top we stare down the 40km 2000m drop onto the plain of San Pedro de Atacama. Or at least we would had it been clear. We actually stare into the grey mist but I know it’s down there.

An ear popping hour later and Ben is making the calls to find his friend living in town. Although the town is tiny, locating her takes another hour because ‘she is too high and doesn’t know how to explain where she is’ Phone battery, whatsapp location share, data network dramas aside when we find her she really is too high to be making a great deal of sense.

What happens next was like stepping into a time machine.

We crossed the yard of an adobe building on the edge of town and, pushing a curtain aside, I meet eight people in a single mattress room. People shuffled, clothes and ash trays are thrown aside and a patch of floor is cleared. A bucket was unceremoniously emptied out the window and upturned for a seat.

Glancing round the room; dreads, piercings, tattoos, and white toothed grins. Joints and shared booze making the rounds of the circle. A card rack of badly made bracelets to be sold to the tourists in town leaning against the pallet wood shelving. A deck of cards strewn amongst the general surf and tiny speakers rattling out tunes.

And, and this is the hard to define or describe part, the air of unshakable faith that this is good, that we are the right, the true and the free. I could feel it breathing from each of them.  I’d stayed in places like this, in the summers of my early twenties. Living in a van or a squat, selling fruit to tourists on a beach. The familiarity crossed language and location effortlessly. The ink scar I’d picked up back then with the specific and singular purpose of reminding ‘the me of forty’ of that sense of what I guess one could surmise as ‘youth’ felt like it was burning as it had the day I’d gone into that tattoo parlour at 19…

…I didn’t sit down.  I’d other things to be doing, so I said my farewells to Ben, wished him luck busking on the dirt streets the next day and took Gellan out into the rain and falling darkness to find somewhere for the night.

Turns out San Pedro De Atacama is ground zero for the tourism industry in this part of the world, on the circuit of the tour groups, a muster point for backpackers some still sporting the airport luggage tags (“there simply isn’t time, we have to be in Paraguy in three days time!”). So I parked in the courtyard of hostel, found a beer and, settled in for an evening of repetitive conversations, looking to eek out something more interesting to talk about than the price of beer or cocaine in various stops on the Peru, Bolivia, Chile loop.

It is too easy to tear down the backpacker tourist. But I don’t think that is either fair nor clever. To be out blazin’ a trail, even a well trodden one, is still your own adventure. Admittedly maintaining the open minded, non-judgemental view gets harder in the face of obnoxiously loud, drunk Americans. I’ve never joined an organised travel trip, but have often wondered about the risk of the company one might get stuck in a bus for two weeks with. A roll of the die, no?

As they left to ‘slam some pisco’ the rest of their group took a visible sigh, and apologised. The French contingent quietly went about preparing a fine salad of fresh vegetables, wafer thin onions, and garlic steeped oils, the Italian bemoaned the lack of cultural diversity in Italy and the Dutch/Finnish explained her thoughts on pre/post Olympics Bejing, all, it would appear enjoying the opportunity to converse without being talked over, or called ‘frikkin weirdo’ for their point of view.  An hour later, curiosity got the better of me and I stepped into the street to see how the yanks had gotten on. Not hard to find of course. Arguing loudly with the bar staff about when happy hour ACTUALLY ends. I sidled in to watch the show, conversed a German and winched at the scene. Even Hunter S tells us “Don’t burn the locals”

Final thought: Given the market forces and the millennial backpacker’s taste I’ve enjoyed a lovely quinoa and green leaf salad, a fresh juice, served in a jam jar, natch, and a rather delicious organic fair trade coffee with bran muffin. Makes a change from noodles.